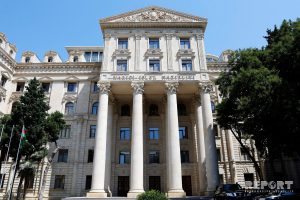 Hopefully acting prime minister of Armenia realizes that his statement at the Paris Peace Forum deeply contradicts the foreign policy of the Republic of Armenia, which violated the fundamental principles of international law, especially the principle of non-use of force and occupied the territories of Azerbaijan and deprived hundreds of thousands of Azerbaijanis historically living in Nagorno-Karabakh of their fundamental right – the right to live in their homelands,» spokesperson of Azerbaijani Foreign Ministry, Leyla Abdullayeva told Report.

«Does the exercise of right of self-determination mean conduct of ethnic cleansing with regard to other ethnic groups living in the same area? Does the supremacy of international law mean military occupation of territories and imposing a fait-accompli solution? The same fundamental principles that Mr. Pashinyan mentions in his statement clearly answer the above questions; it’s enough simply to read the UN Charter and Helsinki Final Act. For those who do not want to read or does not want to understand what is written we’ll quote: “States will respect the equal rights of peoples and their right to self-determination, acting at all times in conformity with the purposes and principles of the Charter of the United Nations and with the relevant norms of international law, including those relating to territorial integrity of States”.

«Addressing the international Forums and speaking of peace and better future is good, but the most important thing is not stating only, but acting in accordance with what have been said. Better future for our region and Armenia itself closely linked with ending the occupation of the Azerbaijani territories by Armed Forces of Armenia and return of all IDP’s to their homelands.

«Minister of Foreign Affairs of the Republic of Azerbaijan Elmar Mammadyarov participated at the Paris Peace Forum and presented a book to the Peace Library. Book entitled ‘Karabakh realities’ had a following remarque by the Minister that world should not forget that there is still injustice in the world when people forcefully ethnically cleansed from the places of their origin like it happens in Azerbaijan as a result of aggression of the armed forces of Armenia. There is no other choice for Armenia rather than withdraw their troops from Azerbaijan’s lands, respect our boarders and restore peace and stability in the region,» Leyla Abdullayeva said.